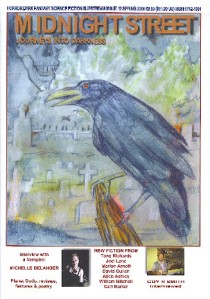 How far can the desire for retribution drive a man? How long can that desire last, and how far is its reach? That it can last a lifetime, I have always been certain. That it can continue beyond, I am now convinced. For although many reading this will claim at least a passing familiarity with the incident at the Circus Rimenny — thanks in no small part to the public’s seemingly endless appetite for any story even remotely tinged with the grotesque — it is clear to me that the full facts of the case are not as well known as they might be. Suffice it to say that the word “unnatural”, so often used by those who feel qualified to comment on the events of that night, goes only part way to describing the agencies that were involved.

This story was the result of a writing challenge between me and some other writers I know, and for this one I tried to think up the most horrible death I could imagine. Having just seen a documentary on sword swallowers that week, the obvious question that came to mind was: What if a sword swallowing act went wrong? Badly wrong? Just how nasty could that get?

It’s been described as a “Gothic Fairground Slaughterfest” which pretty much sums it up in my mind. At the time it was a good opportunity to indulge myself in suitably atmospheric Victorian settings and prose. The end result was bought by Midnight Street, and published in issue 12 (April 2009).

11-Apr-2010: The story gets an Honourable Mention in “The Best Horror of the Year”, compiled by Ellen Datlow (of Year’s Best Fantasy & Horror fame) published on her blog (link here).

18-Jun-2009: Review written by Nick Jackson – reproduced on the Midnight Street website itself.

03-May-2009: Review posted here on the SF Crowsnest site by Gareth D Jones.