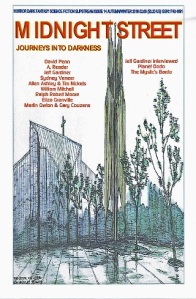 Sectioned /’seksh(‘)nd/ (vb, p part). To be detained under Section 4 of the Mental Health Act 1983, to be admitted to hospital against one’s will, to receive compulsory treatment for a psychopathic disorder or other mental illness.

I can thank a strong batch of anti-malarials for the inspiration that led to this story. “Strong” in the sense of Mefloquine Hydrochloride content, a chemical known to have among its many side effects the tendency to make dreams far more vivid and strange than they would otherwise be. I won’t relate the dream in this case so as not to give away the story; suffice to say I very rarely have bad dreams but this one was a hummdinger. Think “Saw”, or some of the worst bits of “Seven”. I knew as soon as I woke up there was a story in there, and at just 1800 words it’s one of my shortest and punchiest.

When it came up for critique at my writers’ group, the very first comment from the very first person to speak was “This was a horrible story, just horrible.” Someone else had accidently left his printout at Aldershot train station and was genuinely worried that if some unsuspecting passer-by found it then it might give them “a funny turn”. The rest of them all seem to be as sick as I am though, and were only too happy to be offered this tale of depravity.

The couple of lines above are from the opening, a dictionary style opening which I’ve used in one other short-sharp-shocker so far, and may make a theme of if enough ideas present themselves.

The story was accepted by Trevor Denyer of Midnight Street and was published in issue 14.